Jumpers compete for the money in the close of HITS Desert Circuit I featuring the $50,000 Back On Track Grand Prix 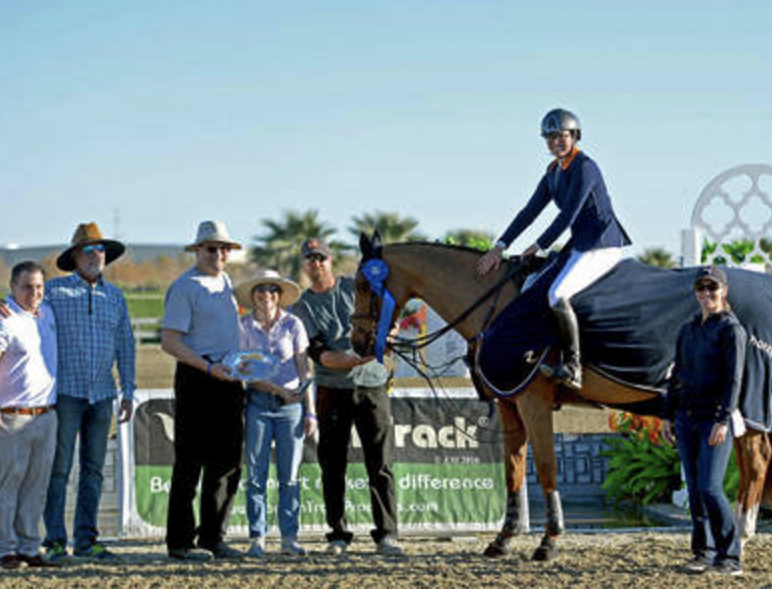 Nicole Haunert and NJK No Regret on their way to a $50,000 Back On Track Grand Prix win. Photo by ESI Photography.

Thermal, CA (January 27, 2016): Desert Circuit I at HITS Desert Horse Park in Thermal, California, came to a grand close with Sunday’s Grand Prix sponsored by Back On Track. Riders and horses battled it out for a shot at glory and a slice of the $50,000 prize purse.

Olaf Petersen, Jr. of Muenchen, Germany, designed a challenging course for the $50,000 Back On Track Grand Prix. Twenty-eight tested the 16-fence track but only three would advance to the jump-off to compete for the blue.

A fault-free first round round had yet to be seen until eventual class winner, Nicole Haunert took to the course with NJK No Regret, owned by NJK Show Jumpers, Inc. Haunert, of Encinitas, California, cruised through course clearing the triple combination that had proven a tough spot in prior rounds. Haunert and NJK No Regret crossed the timers in 83.253 seconds.

Calgary native Tamie Phillips and Cat Balou were just one heart-breaking time fault away from advancing to the jump-off.  They finished the first-round in a close 84.121 seconds, barely past the time allowed, which eventually garnered them fourth-place in the class.

Haunert and NJK No Regret were first to re-enter the ring for the second round. They clocked in fault-free in 47.131 seconds. Following was Bond and Cornancer, who zipped through the course in a speedy 43.939, going all out for the win, but an unfortunate four faults at the B element of the combination, put them behind in second-place. Conejito and Wright came in the ring with the last chance to claim the class. They passed the timers in 46.558 seconds but rails at the A of the combination and the vertical immediately prior resulted in eight faults, putting them in third-place.

The top five concluded with Peter Petschenig of Murrieta, California, and Saint Quentin. They finished the first round in 77.791 seconds with four faults, marking the second top five finish of Desert Circuit I with a win in the $25,000 SmartPak Grand Prix on Wednesday.