San Juan Capistrano, CA - The $25,000 Markel Insurance 1.40m Welcome Grand Prix was quite a contest for the sixty-four horse and rider pairs who galloped on course today. As the last of three in the jump-off, Canadian Brenda Riddell and Silverstar Farms, Ltd.'s Dutch Amouretta were the only pair to produce a double clean effort to take the top prize.

Veteran FEI course designer Leopoldo Palacios (VEN) designed a track that asked a variety of difficult questions for the collection of riders to answer without a rail, refusal or time faults.

Of the sixteen efforts on course, Palacios had a water or square oxer option as the third effort leading to a sharp left turn to a vertical-vertical one stride combination. Another difficult question followed, with a right roll back turn to a square oxer set right along the fence line just past the in-gate, which came down for over a third of the class.

A number of competitors had rails at this point, only six efforts into the round. Fence 8, the Interactive Mortgage oxer set at the opposite end of the field, also caused a rail for a third of the horses.

The final five fences included a solid wall in a tight line to an oxer, leading to the last oxer-vertical combination in a line to the final vertical with a liverpool below.

Notably more than half of the competitors stopped the clock past the allotted time of 81 seconds. Two of those rode the track without a rail.

Clocking in at 81.38, Nicole Haunert and NJK No Regret (owned by NJK Show Jumpers, Inc.) finished with one time fault, ultimately fourth place. Also leaving all the jumps in the cups, Michelle Kerivan's time aboard Colin was 82.59 for two time faults, which earned her a fifth place ribbon.

Seventeenth, eighteenth and twenty-ninth in the posted order were the three who qualified for the jump-off over this technical track. Last week's grand prix winner, Lane Clarke and Georgy Maskrey-Segesman's Balu U, were the first clean and the only male representatives vying for the win.

With one fence down, in a time of 41.15, he left the door open for the women that followed. Saree Kayne riding Rexar Du Houssoit (owned by Woodacre Stables, LLC) picked up two rails in 44.97. Last to go, Riddell knew exactly what she had to do.

"I just had to jump clean, but I was also worried about time faults, because you never know with Leopoldo," the winner noted when asked about her strategy. She achieved the task and happily topped a tough class.

Of her mare, Dutch Amouretta, Riddell said, "I have had her for three years and she's a horse of a lifetime. She's eleven years old now and she's just an amazing horse!"

The host of showcase events continue this week during Spring Classic IV. Friday morning the hunters will compete in the $10,000 USHJA International Derby on the grand prix field. The jumper highlights include the second Interactive Mortgage Horses 10&U Futurity qualifier and the $50,000 Spring Classic IV Grand Prix, presented by Davidson Communities, on Saturday, April 16th.

The afternoon will include opening ceremonies by the Shea Therapeutic Riding Center and a special naming of the grass field that has hosted years of great sport. And as a final celebration, Leading Rider Awards will be presented to wrap up the Blenheim Spring Series on Sunday. 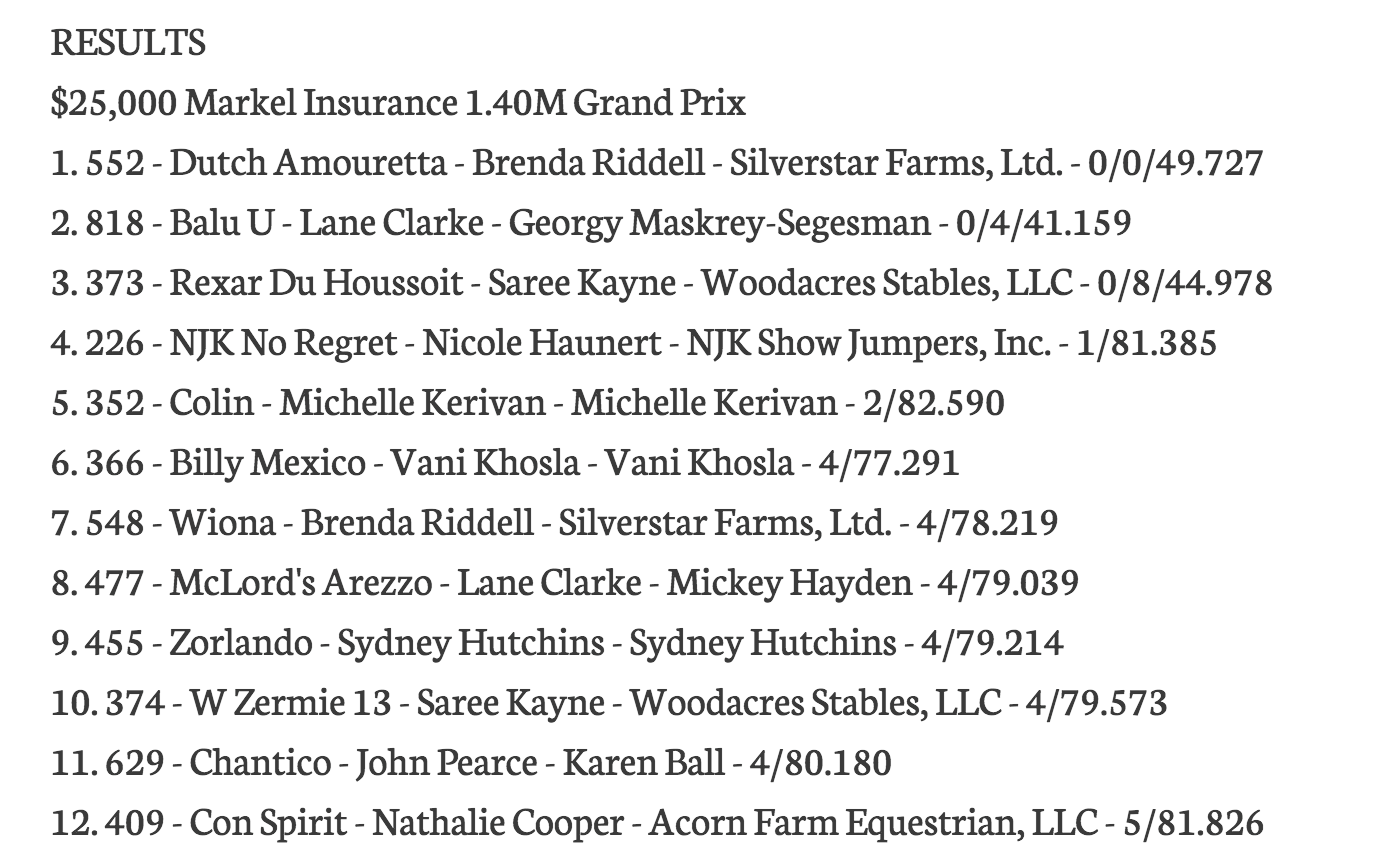