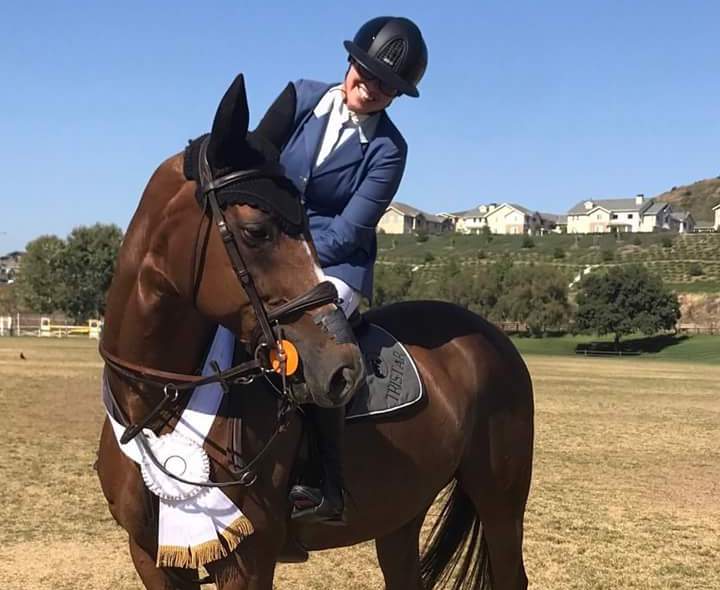 June 25, 2017 – San Juan Capistrano, CA – Joie Gatlin and Rammstein secured a first place finish in the $30,000 Markel Insurance Grand Prix after a blazing jump-off, where she daringly left strides out and all the fences up. Thirteen of thirty entries advanced to the jump-off, and of the four double-clear efforts, Gatlin’s 36.12 time was the fastest.

Course designer Ivan Tagle of Argentina built a 1.40m track that included both a triple and a double combination and required riders to make adjustments and plan their tracks carefully. Gatlin showcased her talent and precision as she guided Rocking Basilisk Farm, LLC’s nine-year-old Rammstein through both phases promptly and accurately.  John Pearce and Chantico nipped at their heels, coming in a close second, double-clean in 36.51, less than half a second slower.

Gatlin spoke highly of the mount she’s been developing this year. “I’ve been working on his speed and moving up and doing some of the other grand prix classes at the 1.45-1.50m height,” she explained. “He’s been very, very consistent. Today with so many clean I thought, ‘Wow, I’m really going to have to go for it,’ and he was right there with me. I left out strides everywhere – he’s got such a rangy stride.”

The duo plans to continue competing at the grand prix level throughout the year and have their eyes on the prize for the Markel Insurance Grand Prix Series Final at The Las Vegas National Horse Show in November.

Second place in the U25 went to Hannah Heidegger and Monarch International’s Di Caprio RV, with a remarkable time of 35.69 but a heartbreaking four faults. Tina Yates and ACE Equestrian’s Ceasar also had a sold time, 36.58, but clipped a rail for a four fault score.

Having competed in the Interactive Mortgage U25 Series Qualifiers throughout the season, Siebel has plans to vie for the win in the Series Final in Las Vegas in November. “I think the U25 Series is so much fun,” she said. “There are a lot of really good U25 riders, so being able to do well in the qualifiers feels like such a great accomplishment.”

The next Series Qualifier will be held during the Showpark Summer Festival at Del Mar in July.

On Saturday evening the Oaks International Grand Prix Field was host to the $10,000 Six Bar Challenge, presented by Park Place Foundation.  Seven entries attempted the Challenge, which entailed riders completing a gymnastic line, where fences are raised with each clear attempt. Jill Humphrey and Sydnie Young’s Carl Casim were the only ones to clear the 1.65m vertical at the end of the line to claim victory.

The event was a social one, with delicious food compliments of Blenheim EquiSports. Sol Agave and The Bakery Truck were on hand to serve competitors and spectators, as they collectively watched the fences raise with each round. All seven competitors aced the first height, but the second round resulted in a rail for Mavis Spencer and Caroline Suarez’s Chenoa.

“He’s very scopey and that’s key for this class,” Humphrey explained. “I’ve done six bar classes a couple times so I knew that even though the two strides walk the same, they feel shorter and shorter as the jumps get bigger, so I felt good about being prepared for that – no surprises – and just stayed tall and to kept supporting him off the ground.”

The action in the jumper ring will continue next week at the Blenheim Red, White & Blue Classic with a $5,000 1.35m Jumper Classic, Fairbanks Valley Farm Young Jumper Championship Qualifiers, and a $30,000 Markel Insurance Grand Prix. 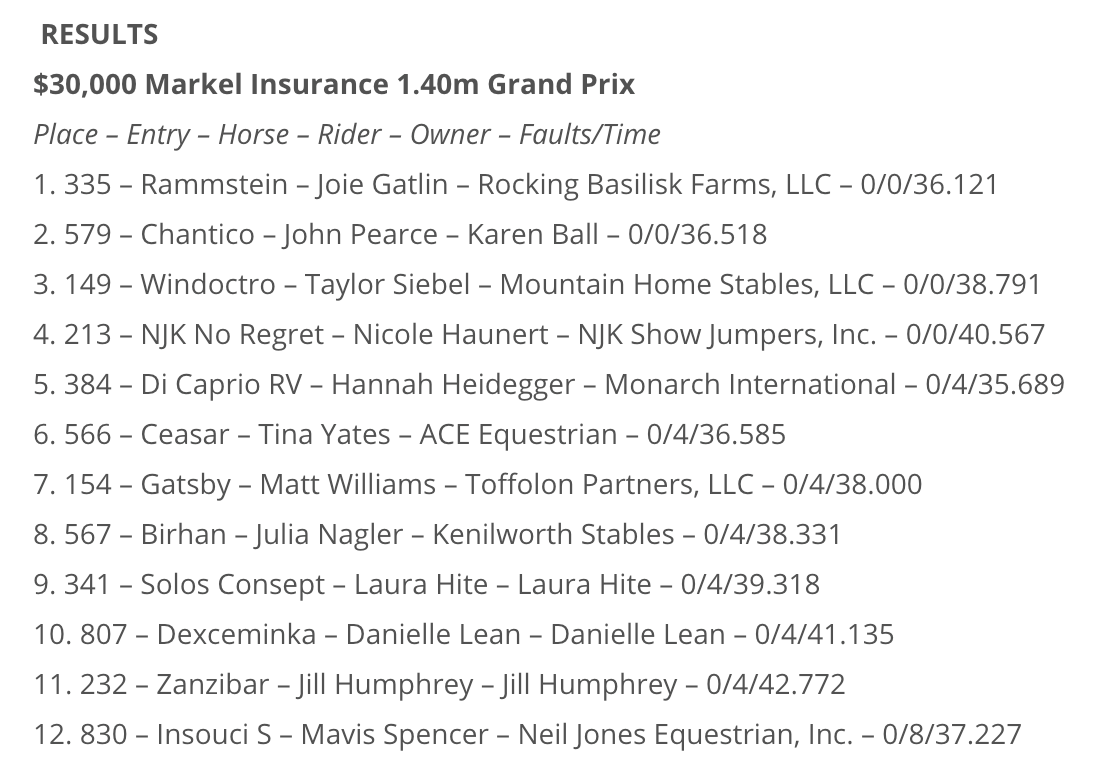